My daughter told me about the Amateur Bacon Cook-off and her desire to enter, so we started drafting up ideas. She was going to originally do the normal stuffed pepper recipe we use (which was just with a single poblano) and I suggested she take it to a higher level.  At the grocery store we looked at the variety of peppers available to us in Florida and I realized that with the size difference we could do a layered stuffed pepper similar to how we do Turducken with poultry. I considered jalapenos for the center, but she found the mini peppers which worked even better.  We purchased a good 4lbs of peppers that day, along with 4 kinds of cheeses (brie, mozzarella, feta and goat). I knew the cream cheese worked from our original recipe, but thought a blend might be even better. Each cheese was mixed with the same herb spice blend and garlic and the ground bacon pieces were fried up and drained until crisp. We mixed it all up and then tasted, but found that most of them were very strong and the bacon flavor wouldn’t come through. We returned to the tried and true cream cheese, mild-ed down the herbs/spice, added more bacon pieces, and found the balance. I started with a mini sweet stuffed with cheese, then wrapped in a slice of bacon, coated the inside of the banana pepper with a bit of the cheese and stuffed in the mini, wrapped the banana pepper in bacon, coated the inside of the poblano with cheese, wrapped in bacon, placed the top of the poblano back on and roasted in the oven until tender. Delicious warm, cold in the fridge the next day, heated back up the next day, chopped in an omelet…the list goes on. 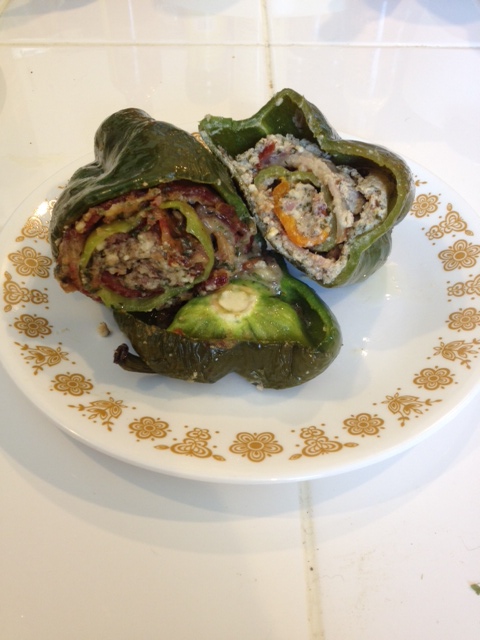