I’m a Wisconsinite born in a Floridian’s life…my parents moved here in their 20s and had me while living down here, making me a natural-born Floridian who longed to return to my “real home” in Dairy Country. I visit our family up there every chance I get, and on one of my recent trips my cousin Linnea Berg (who entered a banh-mi that would accompany my cannoli rather well) turned me on to the greatest bacon ever. We stopped at the Nueske’s store and I ended up flying home with 17lbs of vac-sealed bacon ends and pieces, along with several other pounds of meat treats. I think TSA was boggled that flight… So bacon ends and pieces have been making their way into everything I make since, and when I saw the Amateur Bacon Cook-off I knew I had to enter. My father stole my stuffed pepper recipe and “tweaked it” so I thought I’d do a sweet/savory dish to compliment it. Somehow, cannoli came to mind, and thus was born the bacon cannoli. I knew the bacon had to be in both the shell and the filling. Having never made cannoli, I figured it was hopefully in my blood since I’m Italian. I started with a basic dough, substituting solidified bacon fat for the butter and adding in crispy cooked ground ends and pieces at the end.  The filling is a mascarpone cheese spiked with liquid bacon fat, powdered sugar, whiskey, and more crumbled bacon. Once filled, the ends are rolled in chopped bourbon-glazed pecans instead of the traditional chocolate chips. What resulted was a sweet cannoli with nice salty bacon hints. Perfect end to a bacon-laden meal! 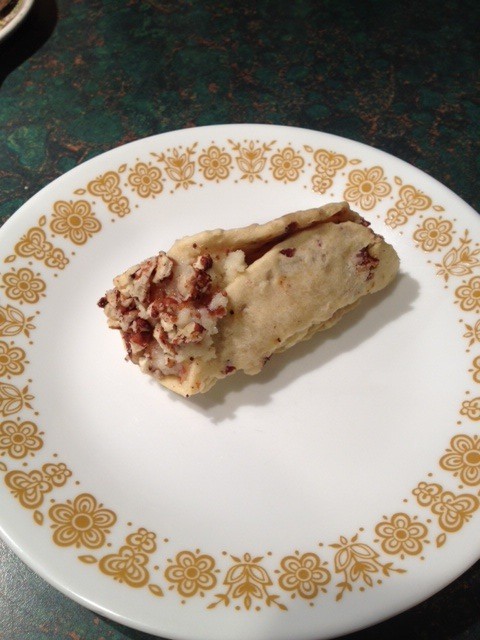