There will be much more post-game coverage to come, but we thought we’d get this info out there first:

We LOVE our chefs.  Without them, there would be no Baconfest.  They are creative, ingenious and generous.  Their enthusiasm for bacon and for the community that food brings together is inspiring.  Our event is about love for all bacon dishes – as our Manifesto reads:

We also wish to celebrate what we consider special achievement in the Bacon Arts.  Our Golden Rasher awards serve that purpose.  This year we awarded 5 Golden Rashers. 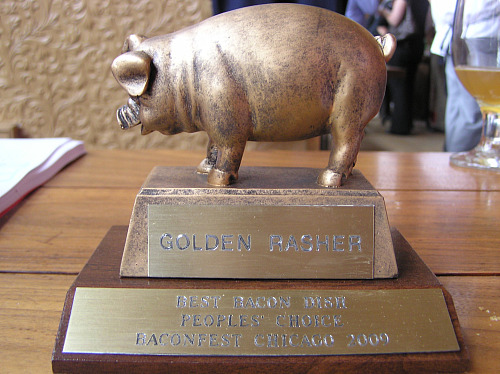 The Chicago Reader, our exclusive media sponsor, ran a contest for best Bacon-inspired Song and Music Video.  They produced this amazing video to inspire contestants to reach for the stars:  The Chicago Reader Bacon-Noir Promo Video

Out of more than 50 entries, Joel Chmara was selected by our literary panel to receive the 2011 Golden Rasher for his masterpiece “JOHNNY BACONSEED:  A POEM FOR THE HOPELESS ROMANTICS“.

Our panel of four judges (Louisa Chu of Movable-feast.com, the Reader’s Mike Sula,  the Sun Times‘ David Hammond, and Tanya Nueske of Nueske’s Applewood Smoked Meats) loved many dishes of the 56 they sampled.  They singled out eight restaurants for special achievement from a very crowded field. We made them choose two to win Golden Rashers.

Here are the six finalists:

These are the chefs that received the two Golden Rasher awards:

James Toland from the Black Sheep won the Golden Rasher for Most Creative Use of Bacon for Banana panna cotta, cherry wood smoked bacon brittle, and peanut butter froth with a lady finger spoon.