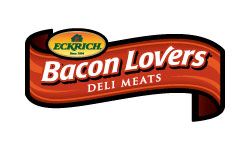 As you veterans of our event already know, Baconfest Chicago is not merely a celebration of Bacon-gluttony though that is undoubtedly our biggest selling point. Central to our mission is supporting our charitable partner:

In addition to donating a substantial portion of our proceeds ($50,000 in 2012), we are again co-hosting a MAJOR Food Drive with the GCFD at the event on April 20th. Over the last two years, Baconfest attendees have contributed over 7,000 pounds of non-perishable food to the GCFD.

We are thrilled to announce that Eckrich has come on board as a matching partner for 2013!! Eckrich will match pound for pound everything we collect with a donation of Bacon Lovers Deli Meats up to 2500 pounds for the GCFD.  This is AWESOME.  Just AWESOME.  Thank you Eckrich for supporting this incredible organization called the Greater Chicago Food Depository.  Their mission: to provide food for hungry people while striving to end hunger in our community.

How can YOU help?  (and by “you” we mean ticket holders attending Baconfest)

On April 20th, please bring donations of non-perishable food with you to Baconfest Chicago 2013 for our Food Drive.

To learn more about the GCFD, visit https://baconfestchicago.com/greater-chicago-food-depository

More on Eckrich below:

We’re excited to say we’ll be making our first appearance as a Baconfest sponsor and will have all five varieties of our Bacon Lovers Deli Meats for sampling:

Each uniquely delicious variety of deli meat is made with real bacon – because everything tastes better with bacon, right?  We like to think of it as our best idea ever.  Bacon Lovers Deli Meats were recently rolled out to retailers nationwide. So if you haven’t tried them yet, you’ll have your chance on April 20th at Baconfest Chicago!

Eckrich is part of the John Morrell Food Group, a subsidiary of Smithfield Foods.  Visit us on Facebook at www.facebook.com/EckrichMeats.