Baconfest is right around the corner. On April 6 and 7, the best chefs in town will gather at the UIC Forum for three bacon-filled sessions to celebrate bacon in all its forms.

You can go to Baconfest!  Tickets are available right now – but they are going fast!

We just released the menu for the event and as always, reading the list of dishes is like reading a 150-line ode to bacon.  But that’s not the only bacon poetry that we want for Baconfest.  Oh no – the Baconfest Literary Panel’s appetite for porky verse is rivaled only by our appetite for Bacon.

So, here is our call for entries for the 2018 Bacon Poetry contest.  Channel your inner Chaucer friends and let bacon be your muse! 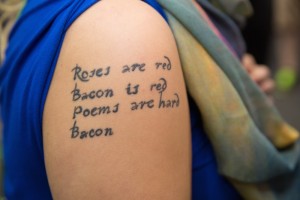 I Can’t by Ian Andrews

I can’t write a poem about bacon,
it can’t be done, it’s too hard.

How do you put words to a food so beloved,
that’s worthy, complex, and pleasing to the bacon Gods above?
I could stanza, Haiku, or rhyme, but all fall short of divine.
And as my write block grows, all my brain knows,
is it’s dying for a plate of bacon to be mine.

No, I can’t write a poem about bacon,
I don’t even know where to begin.

Would I start with the taste or the smell?
Oh the sensation and bliss,
the emotional release when it hits,
as the crisp edge, tender center,
succulent indescribable taste blesses your lips
and my salivary glands immediately swell.

Yet, I still can’t write a poem about bacon,
I’m trying, I promise, but I fail.

Do I write about that first time,
that my life was changed by cooked swine?
I vividly remember at two year’s old,
when I broke free from hot dogs and tried a new flavor so bold.
Little did I know, that my future with food had peaked.
I had found my new favorite meal, and would eat it six times a week.

I’m about to give up on this poem about bacon,
I’m losing all faith it can be done.

Maybe I dabble in bacon history,
after all, to most its origin is a mystery.
I could paint a picture of 1500 B.C.,
as ancient chefs cut the meat and probably thought of me.
Little did they know, the pig back they’d soon smoke,
would become a symbol of personal emotional wealth,
and let’s be honest, true food inspiration and hope.

That’s it, I can’t write a poem about bacon.
It’s impossi.. wait, what’s that above?

Are my eyes bacon glazed,
or am I lost in a food daydream haze?
It’s structurally weak, it has me ready for a bacon feast.
Yet finally, I did it.
My white whale swan song has been sung.
My bacon poem, like the bacon on my stove top, is done. 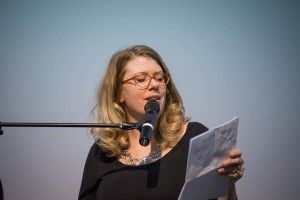