Last weekend, we got together with about 4,000 of our closest friends along with 500 or so restaurant staff and a whole buncha sponsors, and had us a little Baconfest.

It was the tenth time we’ve convened our bacon community – I admit, it was a little different than our first event in the dining room of the Publican, where ten chefs shared bacon dishes with a capacity crowd of 76 ticketed guests.

But a lot about Baconfest is the same as in 2009. We get the same bacon from Nueske’s.  We are the same three dudes with a beer-soaked idea for a “Burning Man” of bacon running around like chickens with our heads cut off.  We order the same three-inch tall pig statuettes for the Golden Rasher Awards. Maybe most important, our event on Friday and Saturday had that same feeling of porky camaraderie that we first felt in 2009, that sense of a lost brotherhood of bacon-lovers getting together to celebrate the most delicious cured meat in the world, bringing to life the inadvertently sincere words of our tongue in cheek manifesto from 2009:

We are part of the human fraternity – every shared experience brings us closer to our fellow man. We believe that eating together is the ultimate equalizer – when we break bread, we create bonds. When we break bacon, we make community. Therefore we are committed to creating shared bacon experiences that strengthen the bonds of the human community, across religion, across race, across gender, across class. That is the promise of bacon. That is the aim of Baconfest.

I felt, again, like a part of a happy bacon community.  A drunk, porky, bacon-saturated, pig-addled crew of merry revelers, delighted by the genius of the chefs and bacon-makers all around me.

So, here’s our wrap-up of the 10th Annual Baconfest Chicago, a “happy gathering of the Bacon-ites” at the UIC Forum on April 6 and 7 2018.

The most amazing thing about the 10th Annual Baconfest might be that Chicagoland’s chefs came up so many dishes that no Baconfest attendee (or eater anywhere) had ever seen before. There were well over 1,000 different dishes at Baconfest before this year’s celebration, but there were still dozens of items this year that were not close to anything that had entered the doors of Baconfests past. The well of bacon creativity is DEEP!

Or maybe the most amazing thing was the fact that, after all these years and with so many other food fests around, we still had more than 4,000 ticketed guests come out to eat quantities of bacon treats that could only be dreamed about in a pre-Baconfest world. Or maybe it’s the simple fact that, once again, 140 different chefs took time out of their incredibly busy lives to come to Baconfest and deliver at such an incredibly high level in the name of bacon and in hopes of taking home a prestigious Golden Rasher.

No, actually, the most amazing thing about Baconfest is that, together, everyone involved helped raise another $30,000 for the Greater Chicago Food Depository, plus they bought $8,143 in raffle tickets bringing the 10-year Baconfest financial impact to $439,058. When combined with the more than 1,200 pounds of non-perishable donations that guests brought this year, that translates to over 1.3 million meals for Chicago’s neediest families.  That’s something to marvel at.

The reason Baconfest was created was to allow people to have the opportunity to celebrate bacon in the most over-the-top way imaginable. We knew, in theory, that there were unlimited culinary applications of bacon, but every single year the chefs exceed our expectations. Take a look at the Baconfest 2018 food menu and the Baconfest 2018 drink menu. Marvel at the food porn our event photographers Anne Petersen and Peter Tsai captured with their lenses.  If you were there, relive the glory; if you weren’t start planning for next year. We hope everyone will be inspired by Baconfest to find creative uses of bacon in their own lives. However, please don’t use bacon as a weapon.

In each Baconfest session, judges give out Golden Rasher Awards, the most coveted prize in the culinary world, for “Most Creative Use of Bacon” and “Best Front of House Presentation.” And this year, for the first time in Baconfest history, attendees got to pick a winner for the “People’s Choice” Golden Rasher award. Here are the results:

Golden Rasher for Most Creative Use of Bacon, Judges’ Choice

Winner: Kinzie Chophouse for their interpretation of “Kinzie’s Sweet Shop”

Runners Up (by number of votes)

Winner:XO Marshmallow for their pastel marshmallow table and balloon wall

Some of our guests’ love for bacon is so strong that they are inspired to express their bacon creativity.

Caitlin Landry won the Baconfest Poetry Contest with her masterpiece, Children of the Bacon, for which she was richly rewarded with a Golden Rasher of her own as well as 4 VIP Baconfest tickets and a bag of Baconfest merchandise.

Each session saw numerous guests who dressed up for the occasion. We picked a favorite in each session: 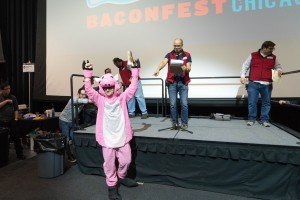 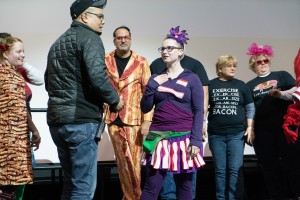 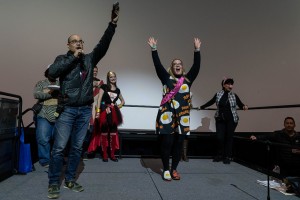 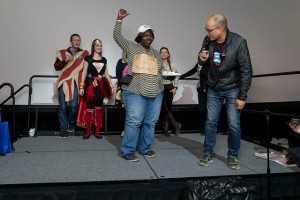 NBA legend and civil rights icon Bill Russell has probably never heard of Baconfest but we’re going to go ahead and declare him an honorary winner in our costume contest. 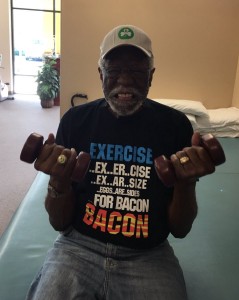 Thanks to our sponsors and volunteers

The highlights of Baconfest are unquestionably the porcine delicacies, but there are two other groups whose participation makes Baconfest possible: our sponsors and volunteers.

With three sessions, each of which has about 50 different restaurants, more than a dozen drink stations, and about 1,500 ravenous people, Baconfest is a potential logistical nightmare. Our volunteers did a masterful job keeping everything running smoothly, supporting restaurants, guiding eaters, keeping aisles clear, and ever sorting garbage to make sure everything that can be recycled or composted reaches the right destination. 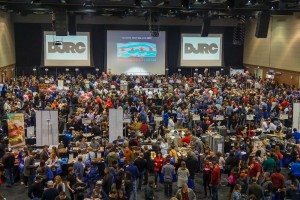 All of our amazing sponsors contribute so much to make Baconfest possible. We would especially like to thank Nueske’s, which once again donated multiple tons of bacon for our restaurants to make use of; Breakthru Beverage Illinois, which supplies cocktails that are so good they alone are worth the price of admission; WBEZ; and Jewel Osco, which was the presenting sponsor at our Saturday lunch session. Old Forester was a new sponsor this year, which allowed us to add a new treat for our VIPs, the Old Forester Speakeasy VIP Lounge, which featured whiskey tasting flights as well as some bourbon cocktails and comfy seating. Other new sponsors included Bulleit, Glenfiddich and Johnnie Walker, as well as bubly, which provided a giant selfie bubble as well as samples of sparkling water. 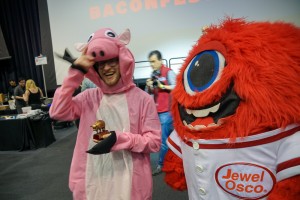 We’ll add more about Baconfest Chicago 2018 on soon, but we wanted to put this brief recap out to get this year’s winners the recognition they deserve. In the meantime, please share your favorite Baconfest moments on to Facebook, Twitter and Instagram and tag us!  We LOVE reading your stories of the bacon-ocity.

And here’s to another decade of bacon!