Triple bacon because bacon is in the soup, on the soup and bacon fat seasons the meat and vegetables.

My recipe starts out by making a cheese soup that is a creamy and a little sharp and has under tones of mustard.

To that I add sweet caramelized onions cooked in bacon fat, a high quality ground beef browned in bacon fat and crispy diced pieces of bacon.

Next I add a little spicy bite and crispy texture with minced Jalapeños, cayenne pepper and Tabasco.   Salt and pepper is added to round out the bitter, sweet, salty and savory flavors.

This soup is then topped with toasted sesame seed croutons to remind you of an old fashion cheeseburger, only better.

Also topping this soup is green onions, bacon bits, a long crispy slice of bacon is added, sticking several inches out of the bowl and can be used as a spoon.  A spoon you can eat.

The rim of the bowl has vinegar pickle slices.  Take a big bacon scoop of cheese soup; make sure you get a crunchy sesame crouton.  Then eat a pickle slice, crunch it and let the vinegar cut the cheese and then take a big swig of icy cold Duvel  beer to cleanse the pallet, Heaven!!! 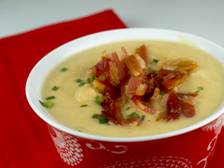 Picture is shown without the croutons or bacon spoon but is meant to give you the general visual idea of a bacon cheese soup.

The nose is citrusy esters and spicy hops, with waves of Belgian ale yeastiness—a surprisingly big, intense bouquet. The body is treacherously light—especially considering its ABV is in the 9 percent range—with a hard, assertive mouthfeel. Stinging carbonation introduces the first sip, although that dissipates pretty quickly after the first couple of quaffs. Next comes a big mouthful of orange and apricot fruitiness, intricately intertwined with biscuity malt and bready yeastiness. The sip then does a stunning 180, finishing amazingly dry with an almost gunshot-like punctuation of spicy earthiness, thanks to the one-two punch of the Saaz and Styrian Goldings hops.