We are pleased to announce that there are TWO winners of the 2016 Bacon Poetry Contest.  Congratulations to Joseph S. Pete and David Kurtz.  Their poems “Baconmandias, King of Kings” and “If It Weren’t for Bacon” have been selected as co-winners for 2016 by the BFC Literary Panel.  We’re pleased to award them with four VIP tickets to Baconfest Chicago on April 30 or May 1.  A big thank you to all those who entered the contest.  We received so many great entries.  Judging poetry is very subjective and in our eyes, you are all winners.  But there can be only  two – and for 2016, their names are Joseph and Pete.  Enjoy their poems below.

Thanks Bacon Nation for your enthusiasm for this contest.  Baconfest Chicago is at the end of the month!!  If you haven’t bought tickets, you’re not too late!

Click here to purchase your all inclusive tickets and don’t be left out in the cold… without bacon.

Winners of the 2016 Bacon Poetry Contest:

IF IT WEREN’T FOR BACON – by David Kurtz

If it weren’t for Bacon I would be broke and alone
Sad , Starved, Destitute with no wife and no home

I knew not of the salty, the smokey, and sweet
The heaven-sent crispy, tender slices of meat

She said “Ill make you a sandwich, and I’ll make it for free,
It’s a favorite of mine, it’s called a B-L-T”

A free lunch for a jew, This I could not resist
So I patiently waited as her frying pan lit

Bacon oh no! Should I tell her I’m Kosher?
Too late, the bread just popped from the toaster

…And my arteries #worthit 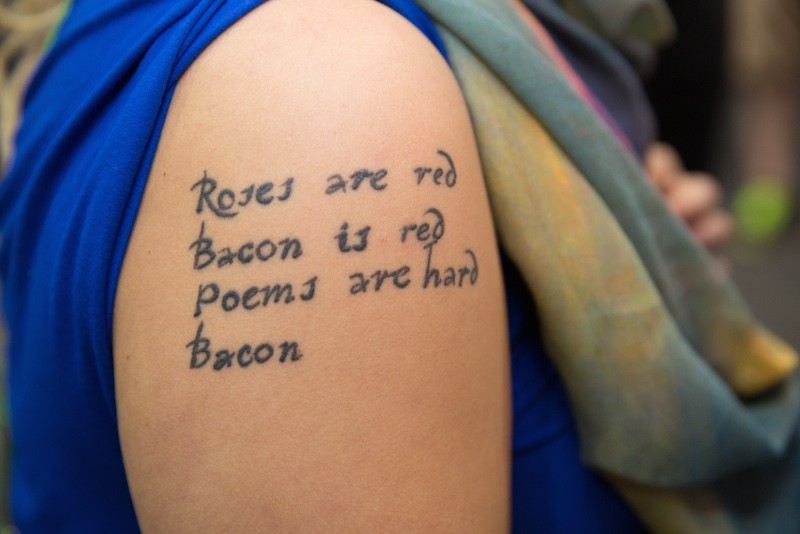