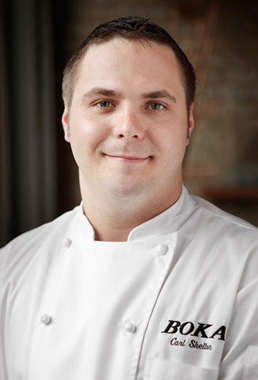 Lending a hand on an animal farm near St. Charles, Missouri, Carl Shelton grew up understanding the bond forged between farmer and buyer. Now, Shelton, the sous chef at BOKA RESTAURANT for more than two years, is on the other side, perusing Chicago’s farmers markets every week for the best product.

At the age of 16, Shelton began cooking his way through a myriad of St. Charles restaurants, which included both mom-and-pop shops and corporate high-volume restaurants. After moving to Chicago in 2004 and then, graduating from Le Cordon Bleu, Shelton joined the Gibsons Restaurant Group. Afte this, he began to stage in restaurants around the city, most notably at Tru, before becoming the tournade at DeLaCosta. Each step, each chef and each station along the way has influenced Shelton’s philosophy on food, but no one has had more of an impact than his mentor, Giuseppe Tentori, executive chef at BOKA.

A firm believer in keeping cuisine simple and clean, Shelton painstakingly examines each product to ensure his dishes are the dishes he would want set on his own table.  A life-long and vocal St. Louis Cardinals fan, Shelton lives in Wrigleyville.

Giuseppe Tentori (Boka)
Recently named one of Food and Wine’s Best New Chefs Of 2008, Giuseppe Tentori has been the subject of much critical acclaim since taking over as Boka’s executive chef. Receiving three stars from both The Chicago Tribune and Chicago Magazine, Tribune critic Phil Vettel went on to say, “Chef Tentori transforms Boka into one of the city’s best.” Established in 2003, Boka offers contemporary American cuisine on what Travel and Leisure Magazine calls, “the hottest restaurant block in Chicago.” Boka seats 90 guests and has room for an additional 75 on its beautiful patio.