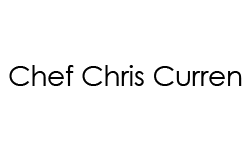 Chef Chris Curren
Born July 20th, 1979 in Niskayuna, NY Chris Curren spent his formative years growing up in Cleveland, Ohio. Curren recalls his earliest culinary memories taking over the kitchen in his family home.“When I was around eleven years old my parents started letting me experiment a little more in the kitchen,” Curren reminisces. “Once they saw that I wasn’t going to burn the house down I was left alone to create.”

Even with those early signs, Curren began to focus on a culinary career only after graduating from the University of Dayton in May of 2001. He quickly enrolled in the Pennsylvania Culinary Institute in Pittsburgh, PA and in December of 2002, graduated near the top of his class.

Eager to put his newly acquired culinary knowledge to work, Curren moved back to the Cleveland area and for the next four years worked his way through the kitchens of many of Cleveland’s top restaurants where he met and worked under his mentor and biggest culinary influence, Chef Bruce Kalman (former Executive Chef of Coco Pazzo, Green Dolphin Street Café, and owner of 5 Boroughs Deli).

Chris’ final work in Cleveland was as Chef de Cuisine at 3 Birds Restaurant. There he wrote seasonal menus and created weekly specials that helped the fine dining eatery earn a spot on lists such as Esquire Magazine’s “Top 20 Best New Restaurants in America” and Bon Appetit’s “Top 50 in 2005.”

Wanting to advance his burgeoning career, Curren moved to Chicago in 2006. By the summer of 2008, after learning the intricacies of the Chicago culinary scene, Chef Curren and his business partner Dan Marunowski opened Blue 13 in Chicago’s River North with the idea of running a fine dining establishment free of pretense or self-importance. 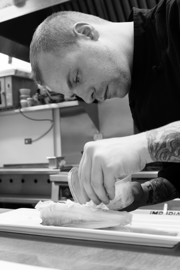