Three Satellite Dinners are in the books and we have one more to go.  Thanks again to Chef Perry Hendrix, Mixologist Adam Seger (with special Guest Steve Dolinsky), the incredible team at Custom House Tavern for being such AMAZING hosts and all of the Satellite Dinner sponsors for their generous support – Nueske’s, Candid Wines, Tenuta Santome, Jo Snow, Hum Spirits, Burton’s Maple Syrup, Moon Mountain Vodka, Rare Tea Cellars.  Everything about the evening was just spectacular!!  Plus, check out Steve Dolinsky slapping sage!

Our next dinner will be at:

Featuring sponsors: Nueske’s Applewood Smoked Meats, Candid Wines, Jo Snow Syrups, and Templeton Rye!  We’re thrilled to have Templeton on board for this dinner – they’ve got an extremely delicious product and have been a long-time supporter of Baconfest!

paired with a complimentary glass of Tenuta Santome sparkling wine, the official bubbles of Baconfest (thanks to Candid Wines) 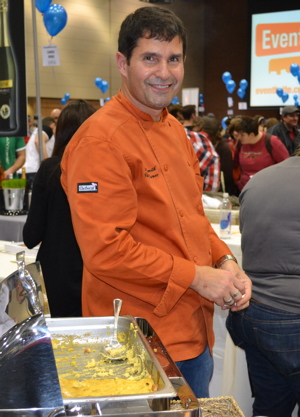 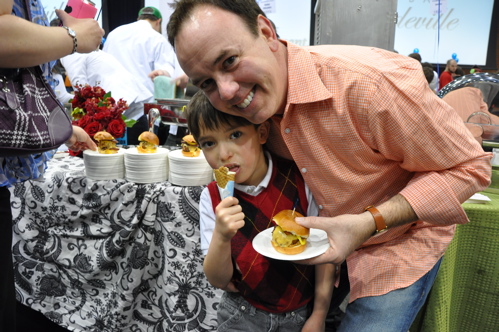 Set in a storefront in Chicago’s Lakeview neighborhood, “Hearty” boasts a menu and design evocative of the warmth and comfort of mid century America. A hand crafted mahogany bar is paired with seaglass subway tiles and exposed brick. Walls of burnt orange and lime set off a wallmounted fireplace and bespoke stained glass art.

The vision for “Hearty’’ is to honor the foods that have become a part of our American culture while contemporizing them for the modern palate. Dan hopes to fill not just the belly but the soul by offering twists on items aimed at provoking memories of meals past. Tuna Noodle Casserole is updated with Saffron Cream Egg Noodles and Seared Ahi while the Corn Dog meets Rabbit Sausage and a rich Ale Syrup. Desserts are exactly what you would hope for, thick slabs of moist Banana Cake with Caramelized Pecans, a Bread Pudding of Wonder Bread, Peanut Butter and housemade Jam.

Steve has long held cocktail culture in high regard and has crafted a classic American cocktail menu. Vintage favorites such as The Brown Derby and The Aviation are featured while the standard Bloody Mary is tweaked with the addition of Aquavit, muddled Grape Tomatoes and Dr Browns Celray Soda. Not to be outdone, the wine list has a singular focus as well. ‘Hearty’ is proud to offer a wine list comprised solely from domestic vineyards. With wines from states as varied as Georgia and Texas; a few of these can not be found outside of their home states and are poured exclusively here.

“Hearty” is that rare restaurant that appeals to both the gourmand and the kid in each of us. “Comfort…revisted”

The Hearty Boys, Dan Smith and Steve McDonagh, are nationally recognized television hosts, trend-setting caterers, and dynamic restaurateurs with little more than “accidental food expertise.” In 2005, they first gained recognition on The Food Network by winning the inaugural season of The Next Food Network Star. This led to their successful television series Party Line With The Hearty Boys and the subsequent opening of HB, one of Chicago’s leading restaurants. Their cookbook Talk With Your Mouth Full has also been well-received. Partners in life as well as business, Dan Smith and Steve McDonagh reside in Chicago with their son Nate.