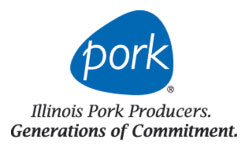 The Illinois Pork Producers Association (IPPA) is an agricultural trade association representing more than 2,900 pork producers throughout Illinois. IPPA is comprised of county pork producer organizations in more than 20 counties throughout Illinois. IPPA is an affiliate of the National Pork Producers Council and the National Pork Board. IPPA provides producers with services that enhance profitability and preference for pork.  Our association, while representing pork producers and the Illinois pork industry, contributes more than $1.7 billion and more than 7,800 jobs to the state’s economy.
IPPA’s mission is to provide producers with services that enhance profitability and consumer preference for pork. IPPA has served pork producers for more than 50 years. IPPA is governed by a 21 member board of directors who are all pork producers with the exception of the Allied Industry Representative. Pork producers serve on a variety of committees that plan IPPA activities throughout the year. Producer delegates set policy and give direction to programs at IPPA’s annual meeting.
IPPA provides services and programs through checkoff and noncheckoff programs. Pork producers pay 40 cents per $100 value into the national pork checkoff program for each pig marketed. For example a pork producer marketing a 250 lb. hog at $40/cwt. would pay about 40 cents per pig into the checkoff program. The pork checkoff funds activities such as: pork promotion, education to consumers, teachers, and producers, youth programs, and research on pork related issues.
Noncheckoff programs are funded by membership dues and proceeds from the Pork Patio at the Illinois State Fair and from the IL Pork Expo, held at the Peoria Civic Center during the end of January each year. Non-checkoff programs focus on state and national legislative issues. IPPA works to represent pork producers’ best interest on issues of importance to pork producers and the pork industry.

As a special treat, the Illinois Pork Producers present you with this video allowing you to