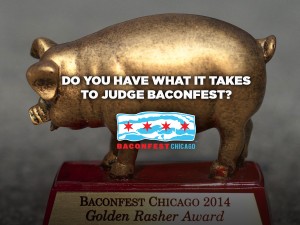 To celebrate the release of our session breakdown, we’re looking for three discerning bacon gourmets to join the ranks of our Golden Rasher judging panels.  The Golden Rasher awards are, of course, the prizes that we give out at Baconfest to chefs for achievements in the Bacon Arts.  Past judges have been drawn from the ranks of local media and food celebrities like Cat DeOrio, “Hot” Doug Sohn, Ina “Breakfast Queen” Pinkney, Mike Sula and more. It is a tough job and demanding – requiring each judge to sample a cornucopia of bacon delights, but we know that our Bacon community has members with the appropriate level of commitment.

If you think you’d be a good candidate, here are three ways you can enter to win!

1. Take a picture of yourself eating bacon!
2. Post it to Twitter between now and 5:00pm CST Wednesday February 22.
3. Include the following text in your tweet: #FutureBaconfestJudge @Baconfestchi – Get tickets and contest details: baconfestchicago.com/judge

1. Take a picture of yourself eating bacon!
2. Post it to the Baconfest Chicago Facebook Page between now and 5:00pm CST Wednesday February 22.
3. Include the following in the text of your photo post: “#FutureBaconfestJudge – Get tickets and contest details: baconfestchicago.com/judge”

1. Take a picture of yourself eating bacon!
2. Post it to Instagram between now and 5:00pm CST Wednesday February 22.
3. Include the following text in your caption: #FutureBaconfestJudge @Baconfest – Get tickets and contest details: baconfestchicago.com/judge

We’ll pick three winners at random from all the updates with the required text, one judge for each session. Winners will also receive a VIP ticket for a friend to join them at Baconfest.

You don’t have to wait for the contest to snag tickets to the biggest bacon-palooza in Chicago.  Tickets to all three sessions on 3/31 and 4/1 are available right now!

1. Limit one entry per person per platform – anyone found to use multiple accounts on the same social media channel to enter will be ruled ineligible.
2. Promotion period: Contest entries must be posted to Twitter, Facebook or Instagram between Thursday, February 9 at 9:00am CST and Wednesday February 22 at 5:00pm CST.
3. Posts must include an original image and the required contest text noted above for each social media site.
4. By entering the contest, you grant Baconfest Chicago license to use your image in marketing and promotional contexts without limitation.
5. Eligibility – Contest is open to entrants 21 years or older.
6. No purchase necessary to enter.
7. Prizes: Three prizes are available which consist of VIP admission to Baconfest Chicago on 3/31 or 4/1 for winner and one guest. Winner will be given the opportunity to serve as a judge for the Golden Rasher award. Approximate retail value of prize $400. Winner is responsible for all other costs associated with the prize including transportation, parking, accommodations. If winner cannot attend the session that is part of the prize, Baconfest reserves the right to select an alternate winner by followup drawing or not to select an alternate winner at all.
8. Drawing: The winner will be randomly selected on or around Monday February 27. Winner will be notified by Baconfest Chicago on the same social media platform in which their winning entry appeared.  Failure to respond to notification within the period specified in the notification will result in disqualification.
9. Contest is sponsored by Baconfest Chicago, 4438 North Spaulding Ave Chicago, IL 60625.
10. This contest is no way sponsored, endorsed or administered by, or associated with Instagram, Facebook or Twitter. Please direct any questions, comments or concerns to Baconfest Chicago.