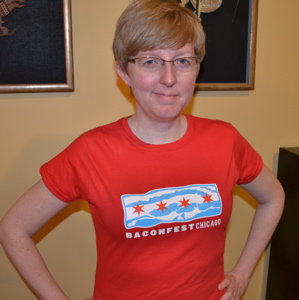 (Ed.: We’re delighted that Kerensa Peterson, wife of Baconfest cofounder Seth Zurer, has lent her writing talents to our blog AND that she’s inspired our very first Baconfest volunteer day at the Greater Chicago Food Depository on May 5!  RSVP below)

As one of the “Baconfest Wives” I’m often asked questions like, “Do you eat bacon all the time?” or “Do you ever get tired of eating bacon?”

Well, no, we actually don’t eat bacon all the time. As much as I love bacon, I’m an advocate of moderation in our hedonistic culinary activities.   I don’t get tired of eating bacon since we don’t eat it every day.   I’m not even sure if we eat it every week.  Regardless of our bacon-eating habits as a family, I do love going out to Baconfest events, whether they’re satellite dinners or the BIG EVENT in April.

Those aren’t the questions that I’m dying for people to ask.  Instead, I wish everyone was asking: “why do these guys keep working so hard to put together these amazing events?”

If you asked the co-founders, they would talk to you about their love of bacon. They’d tell you the slightly romantic story about the night that Michael and Andre went to see a show about craft beer that inspired them to ask, “What do we love so much that we’d dedicate creating an entire show to it?” And then they’d tell you how they called my husband, Seth, to ask him if they were crazy for thinking that the three of them could produce a Bacon-Wonderland. And would people come?

I’m not so interested in bacon that I would spend every last ounce of waking energy I have on producing a professional event, chock-full of amazing chefs creating ridiculously interesting riffs on the theme of bacon.   I haven’t dedicated hours of time to creating an online persona for the event.  I haven’t given up time with my spouse, my child, my art (all the guys are theater artists, too), or any of the rest of my life to usher this Bacon-Wonderland into existence. But these three have.

The question of “why?” is complex and can’t be answered simply.  For me, the answer hinges on something totally different.  Baconfest and the community that has sprung up around it allows us to make a significant contribution to the Greater Chicago Food Depository.  Impacting the operations of an important charitable institution is a dream Seth and I thought we’d be lucky to reach by the time we were nearing retirement. That’s why I’m glad that they work so hard on the event – Baconfest makes that giving possible now.

Last year, Baconfest gave $25,000, ran an amazing raffle and held a food drive at the event.  They attracted a sponsor who matched their guest donations pound for pound.  This year, they want to make the event bigger – not only so they can satisfy more of the many thousands of patrons who wish to attend Baconfest Chicago – but also to contribute more to the Greater Chicago Food Depository.

Whatever this year brings, I’m hoping that I can persuade the guys and all of you, the amazing supporters of Baconfest Chicago, to lend a day of support and work at the GCFD distribution center.   I just think it would be incredible to have a HUGE number of people, brought together by their love of bacon and their belief in ending hunger in our community, to spend one day out of 365 working to feed those in need in the Greater Chicagoland area.

Now I am well aware the co-founders have no time to organize a full day of volunteers for another event.  Maybe this one is my calling.  So if you’re reading this blog-post, it means the guys have agreed to lend some social media support, and we’ve taken another step toward fulfilling an extraordinary dream of filling the aisles of the food depository with volunteers of the Bacon Nation!