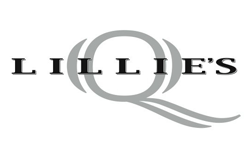 Chef Charlie McKenna owns Lillie’s Q — a Bucktown restaurant named after his maternal grandmother, Lillie, that serves award-winning competition BBQ along with elevated Southern favorites and sides. McKenna also owns a Lillie’s Q outpost in Destin, Florida, with his parents that opened in in July 2008. The Lillie’s Q team (McKenna, his father, and two friends) won numerous awards on the competition BBQ circuit the past 10 years including ones at Memphis In May — which is widely regarded as the world championships of BBQ. McKenna’s teak took first place in pork shoulder in 2007 at Memphis In May, and they’ve placed in the top ten there the last five years. All of Lillie’s Q’s marinades, sauces, signature 15-ingredient “Carolina Dirt” rub were created by McKenna.

The son of an Air Force colonel, McKenna was born in Santa Maria, CA, and spent the majority of his childhood in Greenville, SC, and the Florida panhandle.  Prior to opening Lillie’s Q in Destin, FL, McKenna took on the role of opening general manager of Lucky Strike in Chicago specifically to learn about the financial and front of the house aspects of the business from 2005-2008, and he also helped open four other Lucky Strikes around the country. McKenna was the sous chef from 2002-2005 at Avenues in The Peninsula hotel in Chicago. After graduating from the Culinary Institute of America in New York in 2000, McKenna spent a year and a half cooking at Tru in Chicago and left as sous chef. McKenna also cooked at Norman’s in Coral Gables, FL, under legendary chef Norman Van Aken. McKenna is also a Florida State University graduate.