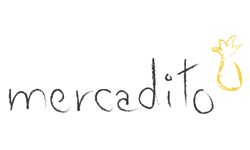 Patricio Sandoval has a hit on his hands with Mercadito, a market food-focused concept that’s already spawned three New York locations. Now he’s trying his hand in River North, where both the vibe and the food, a winning taco-and-tequila combination, are similar to Mercadito’s New York outposts. Expect a mix of lounge, bar and communal seating in a cantina-inspired space and a menu of ceviches, gourmet tacos and sharable snacks, or botanas, plus a tightly edited selection of larger dishes inspired by the flavors of Southern Mexico. The bar stocks tequila almost exclusively (there’s also a small beer list), but you won’t want for options, as the stuff makes its way into a variety of creative cocktails cucumbers to chile peppers. 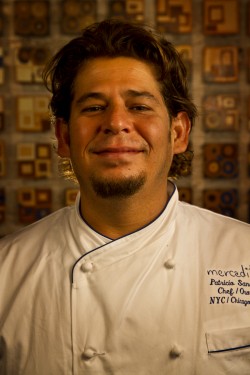 Born on June 16, 1974 in Acapulco, Mexico, Sandoval virtually grew up in the kitchen of his father Manuel Sandoval’s world class restaurant Madeiras. After moving to California to attend high school, Sandoval left for New York City to work with his older brother Richard, who also followed in the family’s culinary footsteps with his own restaurant, Maya. It was while working alongside Richard that Sandoval discovered his passion for cooking.

Although his brother was aware of his potential, Sandoval started on the “ground floor” of the restaurant business – eventually working his way up from an apprentice in 1998 to Sous Chef. After moving back to California in 1999 to help his Richard set up Maya in San Francisco and working as Sous Chef at Hawthorne Lane in 2000, Sandoval decided that it was time to seriously train as a chef. Returning to New York City, he enrolled in The French Culinary Institute and further refined his skills while working with Peter Hoffman at the legendary Savoy in 2000. Upon graduating from The French Culinary Institute, Sandoval returned to the Savoy but was tapped by his brother Richard to act as a Consulting Chef for his latest restaurant, Pampano, in 2004. It was during this time that Sandoval began to consider opening his own restaurant.

Sandoval’s inspiration for Mercadito Restaurants drew from his experiences shopping with his mother in the markets of his native Mexico. The young Sandoval instinctively gravitated towards the small market stalls where local merchants sold native delicacies that fueled a day of bargaining. Never forgetting these delectable yet uncomplicated dishes, Sandoval strived to capture the flavor and energy of this cuisine. Now operating six Mercadito restaurants, New York, Chicago, and Miami, it is safe to say that Sandoval more than exceeded his goal. These restaurants are a fitting tribute to the rich culinary tradition that began with his father Manuel and lingers throughout the Sandoval family today.