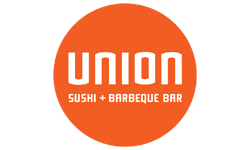 Union Sushi + Barbeque Bar is a neighborhood restaurant that unites Japanese culinary tradition and creativity with a distinctly American persona. We combine the fresh, tempered art of Japanese cooking with the casual, colorful ambiance of an American neighborhood restaurant. Our menu embraces snacking and sharing, features a broad range of Kushiyaki (grilled meat, seafood and vegetables on a skewer) and a variety of sushi and sashimi.

Union Sushi + Barbeque Bar is the result of years of traveling and research and dreaming and eating around the world have led to the creation of a neighborhood restaurant concept that unites Japanese culinary tradition with a unique urban-spun touch. Embracing American warmth and character with classic cultural touch points such as graffiti and rock-and-roll while juxtaposing them with the high art and ritual of Japanese cuisine, reveals a restaurant that is warm, stylish and a unique culinary adventure. A true riff on what is expected or traditional – East or West. Follow our journey and see where it all began at mikeandchaochow.com

Mike Schatzman
Raised in the suburbs of Chicago, Mike matriculated at Indiana University, before a number of corporate positions with News Corp and Visa in both New York and Chicago. After spending a number of years traveling the world for both business and pleasure, Mike developed a strong passion for hospitality while working with a number of Global Travel + Entertainment Clients as the Director of Travel at Visa. Japanese cuisine has always been a favorite for Mike in every city or country that he traveled to. His fire was ignited after meeting and discovering the talents of Chef Chao, where he set out to achieve his dream of creating Union Sushi + Barbeque Bar.

Born in Thailand, Chao is the personification of our multi-cultural bent. Before meeting Mike and beginning the Union Sushi + Barbeque Bar project, he worked at some of Chicago’s best sushi restaurants including Sushi Wabi. Chao is prone to working 18-hour days, but when he is not working, he loves collecting sneakers, biking around the city and hanging out with his two hedgehogs.