Today, we are please to announce the 2016 Baconfest restaurant lineup and general admission ticket release date. On Monday, February 22 at 12 noon, we’ll release the remaining General Admission tickets for sale on our website. Get your clicking fingers ready – tickets go fast. Here’s where to go to purchase: https://baconfestchicago.com/ticket.

Our 2016 roster is a who’s who of Chicago restaurants.  Though it will no doubt change a bit between now and April 30,  for the time being, think of this as the first draft of Baconfest’s 2016 autobiography. The chefs are the building blocks of our story – each one brings their own chapter to the table; each ingenious dish is a page in the bacon epic we’re writing together.

This year’s roster includes 37 restaurants that have never before exhibited at Baconfest. We’ve got the prodigal son: Food Network star Jeff Mauro – the sandwich king of Chicago and chef / owner of the new Pork & Mindy’s sandwich shop. We’ve got the family business: Tony Anteliz’s Cemitas Pueblas reflects generations of family recipes and sandwich traditions transplanted from Humboldt Park to trendy Fulton Market. We’ve got the plucky artisan: Floriole‘s Sandra Holl has built her reputation as a star baker with uncompromising commitment to craft and quality. One new addition even reflects the Chicago’s status as the center of the globalized restaurant world – Imperial La Mian brings hand-pulled Chinese noodles and soup dumplings to Chicago by way of Indonesia.

Our legions of returning chefs have their own stories to tell, too.  Chef Kevin Hickey of Bridgeport’s Duck Inn has been on every best of list in the city and will no doubt be at the top of bacon-lovers’ to-do lists at the event.  We’ve got chefs with Michelin stars like Takash Yagihashi of Slurping Turtle and Carlos Gaytan of Mexique.   A few have been with Baconfest since the very start: Chef Troy Graves of Red Door returns for his eighth Baconfest as does The Signature Room.  These prestigious chefs join more than 150 of the city’s most beloved restaurants on April 30 and May 1 to celebrate pork belly in every form. 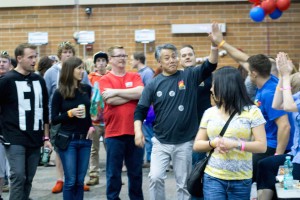 If you’re a restaurateur or chef and you’d like to join us as an exhibitor, it’s not too late. Please reach out to andre@baconfestchicago.com.

Without further ado, here’s the list of chefs for Baconfest Chicago 2016. We’ll release the shift breakdown in a few weeks, just in time for the ticket release on 2/22.

Are you a chef? Do you wish your restaurant was on this list? Shoot us an email at andre@baconfestchicago.com and we may be able to add you to the roster!